My name is Allan Packer, and I write epic fantasy.

This website explores my books (see below), audiobooks, release plans, giveaways, and other related information. It also offers some background on me.

In particular, I'd like to introduce you to my fantasy series…

A young stablehand stumbles upon a seemingly insignificant stone. The world is changed forever…

The Stone of Knowing begins a new saga—tracing a small object of unusual power, its discovery by an ordinary person, and its unstoppable impact on the surrounding kingdoms.

But the stone isn't just one person's secret. Others are aware of it and lust after its power…

*The Seer is a standalone story that can also be read independently of other books in the series. It should be read before The Struggle for Authority (Book Four) though.

**The Rending is a free novelette in both ebook and audiobook format available to readers who subscribe to my mailing list. (A print edition is also available from Amazon and from a wide range of online booksellers worldwide.) It can be read before The Stone of Knowing or The Cost of Knowing, but the recommended reading order is after both novels have been read. A talisman that unmasks thoughts, desires, deepest secrets. The fate of kingdoms depends on mastering its power and protecting it...

Under the cold eye of his father, Thomas Stablehand labors in Arvenon's royal stables as his forebears have done for generations.

Everything changes when he stumbles upon an unusual stone.

His new prize lays bare the thoughts and intents of others. Thomas, intoxicated by its revelations, eagerly indulges his curiosity. He quickly experiences the repercussions of peeking into other people’s minds, and the consequences of misusing his new ability.

When invaders attack the kingdom, Thomas has nowhere to turn except to his friend Will Prentis, an ambitious and gifted leader who has risen rapidly in the ranks of the king’s army. With the kingdom on the brink, Will leads a small band of soldiers to thwart the invaders. Fearing exposure in the capital, and hoping to help prevent catastrophe, Thomas joins them.

But powerful enemies seek the stone for their own ends. As Will faces a relentless opponent whose true purpose remains hidden, Thomas must decide what price he's willing to pay to protect the stone and preserve the kingdom.

The Stone of Knowing is Book 1 of The Stone Cycle, a multi-part saga. The first part of the ongoing tale concludes in Book 2, The Cost of Knowing. The ripples begin to make waves

Thomas Stablehand’s life is not the only thing spinning out of control since he found the stone. Entire kingdoms are now in turmoil.

Will Prentis, newly appointed as army commander, must outmaneuver a growing array of enemies as he prepares for an unequal showdown with Arvenon's invaders. Thomas, hunted unceasingly, must sacrifice all to safeguard the stone.

The fate of kingdoms soon hinges on them as they confront a ruthless invader hiding a darker purpose.

The odds are hopeless. And for three kingdoms, the stakes are higher than anyone knows.

The Cost of Knowing continues the saga of The Stone Cycle, concluding the story begun in book one, The Stone of Knowing. The story of a key character is also revealed in an included bonus novelette, The Gamble. Eyes see no more than a glimpse

Sheylha is a seer—a woman with unique and extraordinary abilities. Powerful men want to control her, to use her to dominate others.

Kalvor is a warrior of unusual tenacity, a hunter who never gives up. Driven by his past, he has become a dangerous enemy.

When Kalvor is sent to find and capture the seer, each of them will be tested in ways they could never have imagined.

In time the outcome will determine the fate of kingdoms. The invasion is over, and the survivors of the shattered Rogandan army have straggled home. The people of Arvenon and the surrounding kingdoms are at peace. Or so they believe.

Little do they know that a new stone of power has emerged, controlled by a cruel tyrant bent on destruction. But King Agon of Rogand lusts after much more than conquest. He will settle for nothing less than unending power.

No armies are massing at the border. The kingdoms face a threat from within.

As chaos spreads, Will, Steffan, Essanda, and Arvenon’s other key defenders are each confronted with crisis. If any one of them stumbles, the kingdom will fall.

The Stone of Authority is Book 3 of The Stone Cycle, a multi-part saga. Arvenon is controlled by a traitor. The kingdom of Castel teeters on the brink. With the unseen hand of King Agon of Rogand pulling the strings, a mantle of oppression is slowly settling over the four kingdoms.

Now recovered from the assassination attempt, King Steffan of Arvenon sets out to wrest back control of his kingdom, vigorously supported by Will, Rufe, Thomas, and their allies. Unlikely influences might ultimately tip the balance.

In a desperate attempt to block Agon, Will and Thomas set out for Rogand. What each of them encounters there will shake them to the core. The fate of four kingdoms will hinge upon the Stone of Authority.

The Struggle for Authority is Book 4 of The Stone Cycle, a multi-part saga.

New subscribers will receive an exclusive bonus novelette—a prequel to The Cost of Knowing that provides further background to one of the story threads in that novel. The novelette is available in both ebook and audiobook format. (A print edition is also available from

Amazon and from a wide range of online booksellers worldwide.)

The prequel, The Rending, is a complete story four chapters (13,000 words) in length.

It can be read at any time, since it does not introduce spoilers for either The Stone of Knowing or The Cost of Knowing. It is, however, intended to be read after both of those novels. 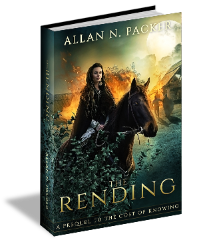